Objectives: Aging is an important contributor to the etiologies of metabolic decline and related diseases, including cardiovascular disease, T2DM and neurodegenerative disorders. Metabolic diseases are characterized by the failure of regulatory genes or enzymes to effectively orchestrate specifi c pathways involved in the control of key biological processes. In addition to the classical transcriptional regulators, recent discoveries have shown the remarkable role of small non-coding RNAs (microRNAs) and RNA binding proteins (RBPs) in the posttranscriptional regulation of metabolism, and their involvement in many pathological states. Our interest in this area is to discover and characterize novel molecular mechanisms that underlie dysregulation of lipid metabolism, glucose homeostasis, and infl ammation during the development of pathologies like Alzheimer´s Disease, Diabetes and Atherosclerosis. Our group will approach these studies from a global perspective. Using a combination of genomics, in vivo models of human diseases, biochemistry, bioinformatics and molecular biology, we will investigate networks of non-coding RNAs and RBPs and their target genes to evaluate their impact on biological processes and age-related pathologies. These areas of investigation are necessary, not only because they address fundamental questions, but also because they will be of undeniable benefi t in our efforts to better understand and potentially treat ageassociated diseases.

Group Leader of the Posttranscriptional Regulation of Metabolic Diseases Group 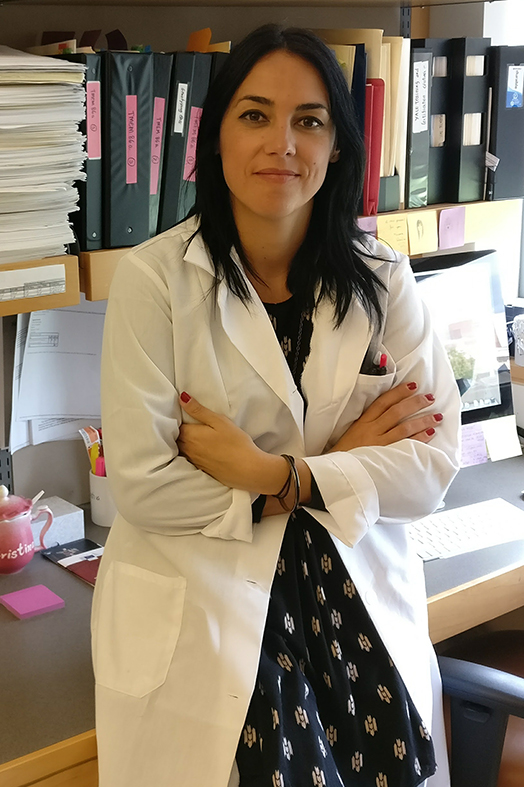 Cristina M. Ramírez received her B.S. in Biology in 2001, and her PhD from the University of La Laguna in 2007. In 2010, after a first postdoctoral period at ULPGC, she was recruited by Dr. Carlos Fernández at NYU to study post-transcriptional regulators of lipid and glucose metabolism. She continued her work at Yale where she was appointed to the rank of faculty as an Associate Research Scientist. In 2015, she was awarded the prestigious “AHA´s Scientific Development Grant” and the “AHA-James and Donna Dickenson-Sublett Award for the Advancement of Cardiovascular Research” special award. Dr. Ramírez´s main research has been focus on the characterization of posttranscriptional regulators of ABCA1, and their implication in Atherosclerosis and Alzheimer´s Disease. She has authored more than 40 publications including book chapters, reviews and peer reviewed articles published in top journals such as Circulation Research, Cell Reports, Mol Cell Biol, ATVB, PNAS, Diabetes and Nat Med, among others. Currently, Dr. Cristina Ramírez is a “TALENTO Program” Fellow and leads the group of posttranscriptional regulation of metabolic diseases which a primarily focus on better understanding and deciphering novel molecular mechanisms and potential therapeutic opportunities to treat age-associated pathologies.

Virginia Pardo Marqués studied Biology at the Alcala de Henares University and a Master in Cell Signaling and Therapheutic Targets in the same university (2009). Then, she obtained her PhD in 2014 in the laboratory of Dra. Ángela M. Martínez Valverde at the Institute of Biomedical Research “Alberto Sols” (IIIBm-CSIC) in Madrid, where she was working on the molecular mechanisms of insulin resistance associated to inflammation in obesity and non-alcoholic liver disease states. In 2016, she joined the group of Dra. Rocio García Carbonero at the Hospital 12 de Octubre (Madrid), working on development of new drugs or therapeutic strategies in the field of gastrointestinal tumours, particularly pancreatic and colorectal cancer, and the development of biomarkers of diagnostic. In 2017, she moved to Laboratory of Clinical Translational Oncology at the Hospital 12 de Octubre, where she focused on several projects aimed to study of new biomarkers for the diagnosis of lung and breast cancer. In January 2019 she joind the Posttranscriptional Regulation of Metabolic Diseases Group at IMDEA Food Institute where her research is focus on the role of novel posttranscriptional regulators of insulin signaling and metabolism.

Mario Fernández de Frutos has a degree in Biology (2015) and a master´s degree in Cell Biology and Genetics (2016) both from the Universidad Autónoma de Madrid. During his degree and master´s research project, he joined at the group of Endocrine and Nervous System Pathophysiology at the Institute of Biomedical Research “Alberto Sols” (IIIBm-CSIC), where he worked on the characterization of double knock out mice model for future studies of the Allan-Herndon-Dudley syndrome, a rare neurological disease due to deficit of thyroid hormone transport. He joined to the posttranscriptional regulation of metabolic disease group at IMDEA Food Institute as Ph.D candidate, focused on elucidate new postranscriptional regulation mechanism of metabolism and their implications in neurodegenerative diseases.

Ana Pérez García has a degree in Biology from University of Salamanca (2012) and a master´s degree in Biomedicine from University Complutense of Madrid (2014). She obtained her Ph.D in Biomedicine from University Complutense of Madrid (2018) and her doctoral thesis focused on role of PAS Kinase in adapting to different nutritional states in the liver and resistance to obesity, by using of PASK-deficient mice. In March 2019 she joined the Posttranscriptional Regulation of Metabolic Diseases group at IMDEA Food Institute.

Marta Torrecilla Parra has received a degree in Biochemistry (2016) and a MSc in Neuroscience (2018) from the Autonomous University of Madrid (UAM). During her undergraduate and postgraduate projects, she studied the role of IGF-1 as a neuroprotector in two different contexts: sensorineural hearing loss provoked by exposure to cisplatin (at the at the Institute of Biomedical Research “Alberto Sols” (IIIBm-CSIC) and diabetes and obesity, focusing on the adverse effects of palmitic acid on the astrocytes and neurons of the hypothalamus (at the “Niño Jesús” University Children’s Hospital). In the latter case, she was also interested in the dimorphic responses to high fat diet and the collaboration of estrogens and IGF-1 to exert protective actions in the brain. In June 2019 she joined the group of Posttranscriptional Regulation of Metabolism in IMDEA Food as a research assistant.