Parents’ nutritional miRNA legacy: the sins of our parents

Prenatal and postnatal nutritional status may influence adult susceptibility to the development of cardiometabolic risk factors such as impaired glucose tolerance, type 2 diabetes, dyslipidemia or obesity. Moreover, increasing evidence suggests an important biological role of fathers in obesity and metabolic programming of their offspring1 . Though little is known about the mechanisms that cause these phenomena. Epigenetics, which is the study of heritable alterations in phenotypes and gene expression that occur without changes in the DNA sequence, is one of the most promising areas to understand these phenomena.

DNA methylation, histone modification, chromatin folding, and small regulatory RNAs alterations, which collectively enable the cell to respond quickly to environmental changes, are epigenetic mechanisms. These different mechanisms may explain in part the way by which dietary factors in early critical developmental steps2 , or even parental eating habits3 might be able to affect the susceptibility to develop metabolic diseases in adulthood. microRNAs (miRNAs) are small regulatory non-coding RNAs that regulate gene expression by targeting complex biological pathways. miRNAs act as ‘fine-tuners’ of gene expression under physiologic conditions, but it is under conditions of stress where their function becomes specially decisive, underscoring their role in health and disease4 .

The role of miRNAs in fetal programming remains largely under-studied5 . In this context, IMDEA researchers at the laboratory of disorders of lipid metabolism and molecular nutrition (DISLIPID lab) are evaluating the influence of the consumption of different types of fatty acids, at critical developmental stages, and their susceptibility to develop cardiometabolic disease later in life6 through mechanism mediated by miRNA action7 . But miRNAs might not be the only small RNAs involved, as sperm transfered RNA-derived small RNAs might also contribute to intergenerational inheritance of diet-induced metabolic disorders8 .

However, other epigenetic changes, such as changes in DNA methylation, histone modifications and others should be considered as potential carriers of epigenetic information that passes from one generation to another. In this aspect, nutrition and lifestyle factors may play a role. Indeed, dietary excess of our parents (sins) may underline the current obesity and diabetes pandemic. But this needs to be experimentally tested in our specie. 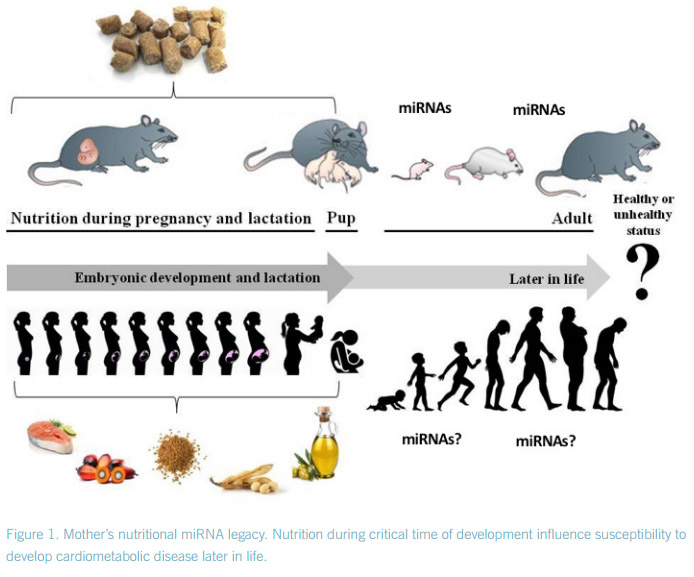