Objectives:  according to the most recent data published by leading authorities, a high percentage of cancer cases may be preventable. Diet and life style are key factors in cancer prevention, but also exert essential function as coadjutants for cancer patients during and after therapy. Metabolic reprogramming is a hallmark of cancer in which nutritional strategies might play a key role. Thus, it is necessary to develop personalized treatments based in molecular and metabolic alterations, combining complementary precision medicine and nutrition. We understand Precision Nutrition for cancer as highly efficiency products and strategies personalized for specific physiological conditions and population groups. This new way of understand Nutritional Sciences addresses different areas of knowledge including the precise (molecular) mechanism of action of bioactive compounds present in foods, the genetic profile and its impact in the personal susceptibility to develop cancer and respond to specific treatments, as well as the development of specific strategies for current personal physiological conditions.

Deputy Director, Director of the Precision Nutrition Program and Group leader of the Molecular Oncology Group. 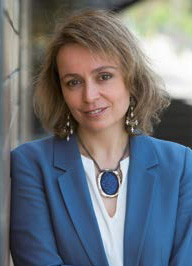 Dr. Ana Ramírez de Molina has developed her scientific career in the field of lipid metabolism, molecular oncology, nutrition and cancer. She has worked as an associated researcher in the Traslational Oncology Unit CSIC-UAM-La Paz Hospital (Madrid), and has performed long postdoctoral stays at Cancer Research UK Centre for Therapeutics (London) and the Molecular Pathology Division of the Sloan Kettering Cancer Center (New York).

She has published more than 60 scientific articles in her research field, is co-inventor of 6 patents in different phases of exploitation by a biotechnology company and has supervised 6 PhD Thesis. Several of her patents promoted the creation of a
spin-off company from CSIC focused on the development of new tumour markers and therapies in Cancer in which she was former Director of Research, Development and Innovation for more than 3 years. She joined IMDEA Food Institute in 2010, where she leads the Programe of Precision Nutrition and Cancer.

From 2011 she has been the Coordinator of Research, Development and Transfer, and in 2014 was promoted to Deputy Director of the Institute. In 2002 she was awarded with the prize Young Researchers MSD, in 2003 the extraordinary doctorate recognition as the best Thesis of her promotion in Molecular Biology, and in 2016 the 8th March distinction from the Community of Madrid as an outstanding woman in Science.